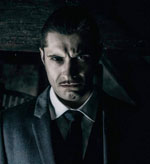 A extending hand may hide the safeman intend.

Giovanni Basole, an aging New York mobster caught up by older events is waiting his trial at the Harrison's remand center.

Afflicted with a generalized cancer and condamned by medics, he should be dead even before the first court hearing. That is why he follows Agostino's advices, an former partner, to get the help of Douglas 'Doug' Mitchell, the son of an old late friend.

He relies on Doug to get him out of jail to see a last time his grandchildren's smile before the lady with the scythe took him away in the darkness forever. Assisted by Flanagan a former military heli pilot, Doug takes him in Canada to visit Doctor Roach, a discreet surgeon able to turn him into a colored man.

Doug's contract included the killing of the old man so he would not have to suffer anymore from cancer. He looked puzzled, sat on a fence when Basole is murdered under his nose by a sniper.

Who does this benefit ?