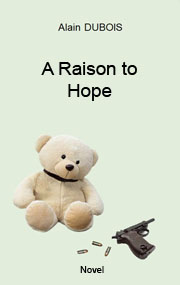 A reason to hope.

It's not use crying over spilled milk.

Dominique Marchand did bad things when he was younger. He had crossed the yellow line many times when he held up cash transportation, becoming an expert in that field. But one day, Lucien, an old chap and best friend introduced Antoine to reinforce the team. While their last action, the young accomplice who wanted to burn the steps murdered two security guards, a way to have himself known and respected by the underworld.

Dominique was not only upset, he was terrified by that wanton action and a scuffle broke out between them two. Antoine drew his weapon but unfortunately, he shot himself and died.

Matteucci an underworld local leader and Antoine's dad, held him responsible for that accident, forcing him to flee after price put on his head. Dominique's wife died in the explosion of his own trapped car. To survive he ran out far away from Marseille and put his 5 yo daughter in his tante care.
During ten years he found a shelter in a monastery located in the Pyreneans mountains, but the abbot's death called in question his presence in the religious site.

Having no way to live normaly, he visited Lucien, the only one he had faith in him, the only one able to help him. He just ignored that his old friend worked actually for Matteucci and the only advice he gave him was to go in Spain. Overthere, he invited him to meet Inès, a lady once involved in ETA strong actions.

So did Dominique, but he was tired to flee. Henceforth, he is determined to make fear changed the side. Alone, his task looked unachievable, unless Inès suddenly agreed to support him. But for what reason ? Was it only possible their relationships were close enough to turn into love ?